I invented a new musical instrument yesterday, one I have decided to call the "tambouraca." It's sort of a cross between a tambourine and a maraca. It's a shaker and makes a similar sound to a maraca, but you can also play it like a tambourine and hit it as well as shake it. This is the kind of musical craft project a very non-crafty person like me might come up with. 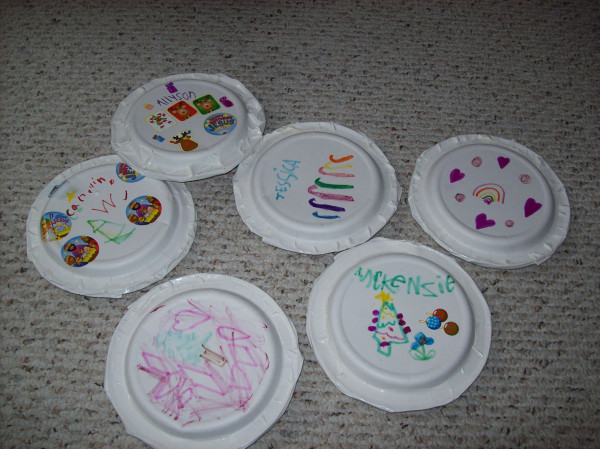 Basically, it was a bit of desperation in trying to come up with something that would be easy enough to pull together. The song my kindergarteners are doing for Christmas has a sort of Latin/Caribbean feel to it, so I thought some kind of rhythm instrument might be fun, but all the instructions I found for making various shakers were either too complicated or didn't allow enough room for the kids to be creative (where's the creativity in pouring rice into plastic bottles?). The tambouraca involves two dessert-sized sturdy paper plates put together with duct tape around the edges and dried beans inside. The Target store brand plates are white and aren't coated on the bottom, so the kids could decorate them with crayons and markers or stickers. I found white duct tape that's sturdy enough to hold them together, and I had a bag of beans in my cupboard that had a hole in it, so I scavenged the beans that had spilled all over the shelf.

I was surprised by what a huge hit this was. They loved this project. They enjoyed making them (they mostly did the coloring and the adults/teen put them together) and then they danced around playing them. Now I just have to come up with how we'll play them to go with the song and try to get them to follow instructions and play them together. I sat with the pastor at dinner last night and mentioned the idea of having these instruments in church, and he didn't seem alarmed. I suppose they're less easily weaponized than rhythm sticks, and he was impressed with our bravery in letting preschoolers use those in church last semester. Then again, our pastor isn't the type who expects kids to be absolutely silent in church. As he's said, if the kids are making sounds, then he knows someone in the congregation is awake.

I had made one as a proof of concept, with just enough coloring to test both crayons and markers, and when I showed it to the kids to let them know what we were doing, one little girl looked at it with wide eyes and sighed, "Oh, it's beautiful!" This is why I put myself through this. It's good for my ego.
Collapse