I accomplished something major on the to-do list yesterday. Here's the before: 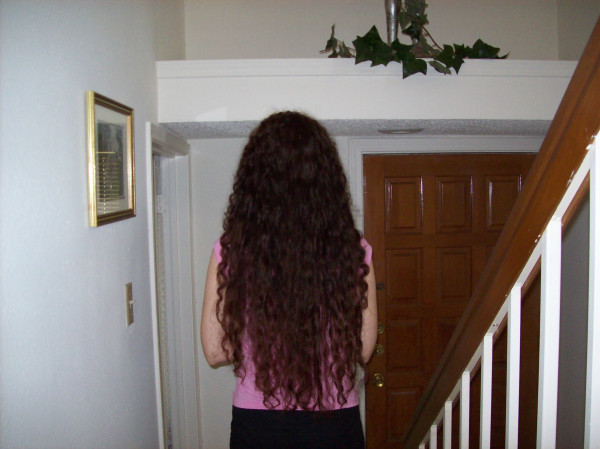 And the after, plus the 10-inch ponytail that will be going to Locks of Love. I've been procrastinating on a haircut for a couple of years. I was rather severely traumatized by my last one when the stylist practically pinned me down and insisted on straightening my hair over my objections. Then it got to be kind of fun seeing how long I could get it and doing some fancy things with it occasionally. And then I realized that a haircut would involve chopping off a lot, so I might as well do some good with it. A lot of the little girls at church were growing their hair out and getting it cut off to donate, and I figured if they could do it, so could I, so I let it go a little longer so it wouldn't be too short when I cut off the required amount. It's still a little shorter than I'd ideally have it, but it grows pretty fast and I'll live. It's just at the length where it all falls forward over my shoulders and gets in my way. It still looks pretty long in the photo, but that was soon after the cut before it started curling up a lot more. Now that it's settled down, it's falling to just barely past my shoulders, and it feels really weird. However, I do have a little more versatility without all that length. I can still put it in my usual bun with fewer pins, but I can also do a bouncy ponytail again, and I can do a braid that doesn't get caught in the waistband of my jeans or strangle me in my sleep.

The weird thing is, last night I wore my hair down when I went to choir, and nobody noticed that my hair was more than ten inches shorter. I do wear it up most of the time, but I had it down or in a ponytail for much of the music and arts camp, and there were people in the choir who saw me there. I'd have thought that going from past my waist to barely below my shoulders would generate some comment, but I guess people just see "long."

I should weigh myself and see how much weight I've lost. My head certainly feels lighter.

The major items remaining on the to-do list involve some shopping, but I don't much feel like going out today. I want to focus on the work. I figured out that part of the reason I hit a brick wall was that I put something that should have happened later in the book in too early in a fit of overeagerness, and that kept things from going forward because there was nowhere to go from there. Once I fix that, I should be able to move forward. However, I keep forgetting that with each revelation that's made, there's an implied revelation that goes with it, and so I'm also forgetting to have the characters react to both the big revelation and the implied revelation, which then should change all the interactions. I knew this plot would be complicated when I came up with it, but I didn't realize I'd need to wallpaper the house with Post-It notes to remind myself of all the things that are going on.

But I have no errands, no classes, and no rehearsals today to distract me, so I'm hoping to get things fixed and then get some momentum going.
Collapse