The new web site is done! I've gone through most of it, so I think it all works properly, though you may have to refresh your browser to get the new site if you've looked at the old site recently. I had a few glitches that I think will eventually be resolved by clearing my cache since the file on the server is correct. It just keeps trying to bring up the old thing from the history.

So, without further ado, here's the new site, complete with the new book cover.

And because I'm feeling charitable, in case you don't want to go to the site just to see the new cover, here it is: 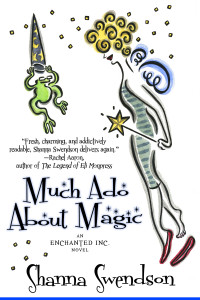 You'll notice that the artist is the same, as is much of the look, though there are a few slight changes because the designer is different.

I have to thank Rachel Aaron, author of the Eli Monpress series (new book coming out next week!!!!) for the lovely cover blurb:

"Fresh, charming, and addictively readable, MUCH ADO ABOUT MAGIC is just what I was waiting for!" --Rachel Aaron, author of The Legend of Eli Monpress

In other news of things to look forward to, they've put out the first trailer for the movie version of the Les Miserables musical, and while I was really skeptical about what I've heard of the production, this trailer has me optimistic. I'm not a huge Anne Hathaway fan (although apparently at one time her people were looking at Enchanted, Inc. as a vehicle for her, believe it or not -- maybe that's why I'm iffy on her because she's all wrong for Katie, and that influenced me), but she absolutely nails the emotion behind "I Dreamed a Dream." It's not a hopeful song. It's a song of despair and lost hope. I know Hugh Jackman has the chops to do Valjean, but in more recent years, he's had a tendency to get nasal and blatty, so I hope the musical director cures him of that here. Russell Crowe is a good fit as an actor for Javert, but I have no idea how he'll handle the vocals. Amanda Seyfried is just about perfect as Cosette, and she can sing, but I don't know how high her soprano goes. The actor playing Marius, Eddie Redmayne, is absolutely amazing as an actor, one of those rare people who can convey an entire script just with his eyes and the slightest twitches of his facial muscles, but I have no idea if he can sing. I suspect that either I'll totally hate the movie or I'll become obsessed and see it as many times as I've seen the stage musical (I've lost count -- I think I'm up to 12). The trailer brings tears to my eyes, which is a good sign. My family usually doesn't do movies at Christmas, but if this is looking good, we may have a day after Christmas family outing, since we all love this musical.

And now I just found something on YouTube someone put together showing the singing ability of the various cast members, and holy cow, can Eddie Redmayne sing -- he's a real, classical singer. Yep, I can't wait to see him do Marius. Russell Crowe doesn't seem to have a lot of oomph (at least in that clip) so probably couldn't do the role on stage, but I think his voice has a nice richness to it. This could actually be good.
Collapse